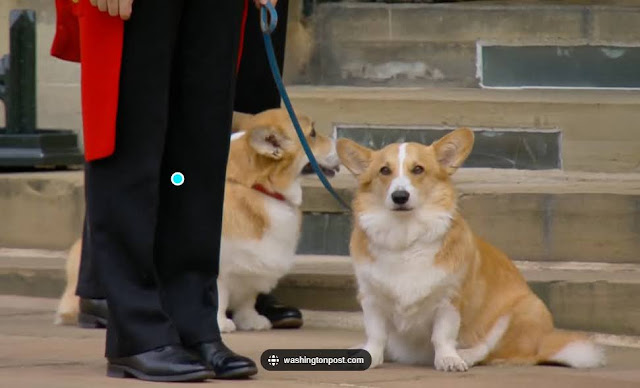 We are so happy to hear that Prince Andrew will now have Queen Elizabeths 2 Corgis and a Dorgie living with him and his family. Thank you, Prince Andrew.

We are beyond excited that King Charles III will be moving his Jack Russell RESCUE pets into the the Palace! they will be the first ever dogs to live there that were rescued from a Shelter.

Blue and Bluebell are their names, and you can read all about them HERE below is from the article on MSN.com

Camilla adopted the pups from the Battersea Dogs and Cats Home in London, of which she is the royal patron. In an interview with BBC Radio 5 in 2020, she revealed that the poor pooches were found separately in terrible condition—Bluebell was rescued while wandering the woods, and Beth had been moved around her whole life.

"They found [Bluebell] two or three weeks later wandering about in woods, no hair on her, covered in sores, virtually dead," she said in the interview. "And they nursed her back to life, and her hair grew again. She's very sweet but a tiny bit neurotic, shall we say."

Fortunately, the two dogs got along well. And considering they're now King Charles III's dogs, they'll certainly never want for anything again. The King and the Quenn Consort, closed with these words. "Adopt, don't shop"

How about these apples Brian????

Posted by MadSnapper at 5:21 AM

I am glad the Queen's Corgis will have a happy home. It is wonderful King Charles and Camilla have adopted and rescued their dogs too. Cute doggie photos. HUGS, have a happy day!

we hope the life with terrier is wonderful and & merrier for Charles and camilla....

Good that the queens corgis will go to a good home.
That's awesome that Charles and Camilla have rescue dogs. Those are definitely two very lucky dogs.

I'm so glad to know I wasn't the only one concerned for the Queen's furbabies' futures.
I didn't know that about C&C's rescue pups! That reminds me what my DIL called her little accidental rescue dog: "Slum dog millionaire."

The perfect way to treat your babies. Love this. I've never shopped for my babies.

Have a woof woof day and rest of the week, Beau. My best to your mom. ♥

Royal pets sure have it made. Imagine how fun it would be to explore that HUGE castle...or all the HUGE castles that the Royals own!

That is wonderful that they chose rescues. But I daresay that are not loved more than you are loved. Or my grandpups either.

Love that story - the one Charles is holding looks like Disco. He was half Jack Russell.

Such a great story!!

Furrst, Happy birthday to your Angel Mom! Everybody needs loving glue. And we did know about Blue and Bluebell! We get a whole bunch of Royal News up here in the Great White North. Mom's family is FULL of Brits! Her dad is from Liverpool and most of Mom's cousins still live in jolly old England (Wales, Scotland and Ireland). Did you know that King Charles III is one of the most successful British Artists? He paints the most wonderful Watercolour landscapes. Keep being awesome! Purrs Marv

This is beautiful news. I'm so happy for them. Thanks for sharing this with me.

Good for them! Thank you for telling us.

Yes, that's a purrfect pup purrformance by everyone, hooray!!!

It is so cool that these rescued dogs are now royalty! They are going to have the best time ruling the castle.

Hello Beau, from an abusive life to the home of the King and Queen Consort. Mind you, they are not going to realize that. They'll just appreciate being treated kindly and fed well, just like all doggies should be. Just like you sweet Beau, you receive the same treatment and probably a whole lot more :) and will always be our star thanks to your Mama.

Thanks for the news on both the late Queen's dogs and King Charles III's dogs, too. I had hopec they would adopt the corgis!