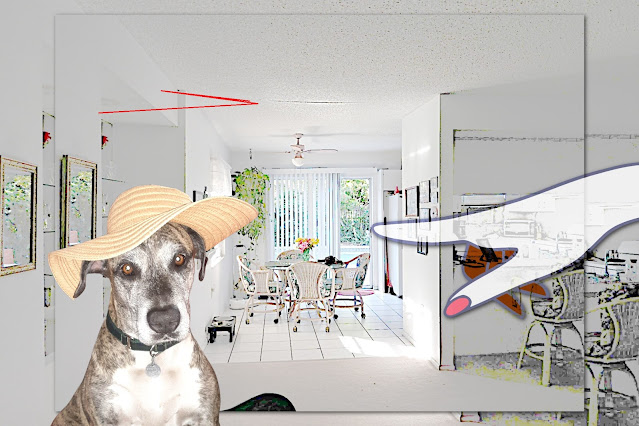 Three nights in a row, we were under attack from firecrackers, cherry bombs, hissing and booming rockers. THREE NIGHTS

I was exhausted from pacing and lack of sleep.

Saturday, AM I slept all morning, the sleep of exhaustion and then at 3:30 pm

Knock Knock Knock
WOOO WOOO WOOO let them IN, I say let them IN!
Some Ones are at the door and Mama let Two Men and a Boy in the house!
I thought they came to visit me.
Remember Humberto the A to Z Handy Man that came and made the door slide easy?
The Two men were Humberto's Brothers. They brought the boy as a helper.
See the crack the red arrow is pointing to?
That is the seam where the sheet rock of the ceiling came loose.
It has been hanging down for 87 years and Mama was always nagging Daddy to
get it fixed.
It was about 4 feet across and Suddenly when Mama got up one morning it was lower and longer and about to fall down.
On our heads! or so she said to Daddy.
without another word she dialed Humberto and he said he would come Saturday Afternoon and fix it.
Daddy was unhappy!
At 2:30 Humberto called and said he was stuck at another house and could not come, and I heard Mama in her PANIC voice say YOU ARE NOT COMING????
I could not hear Humberto, but Mama told Daddy he said he would send his brothers.
Daddy was unhappy!
I was happy because there were THREE humans in the house.
2 men and a Boy... WOOOO WOOOO
We all sat in the living room and watched them drill, and screw stuff and dab stuff and
one hour later the ceiling was repaired, and the company left, and I had been awake all the time they were here and then we went to bed and the IDIOTS made loud noise and I paced
and Mama petted me, we finally went to sleep but then Mama woke up at 2:30 am and went in the
living room and sat down with her kindle to read.
AT 2:30 AM she was reading. I got on the sofa and slept.
I slept and slept and slept and did not get off the sofa for hours.
Then SHE came with the cell phone
and here I am
Exhausted! fending off cell phones and wondering how many more nights until the
bombs stop dropping.
Mama Said Two More Nights. to be continued 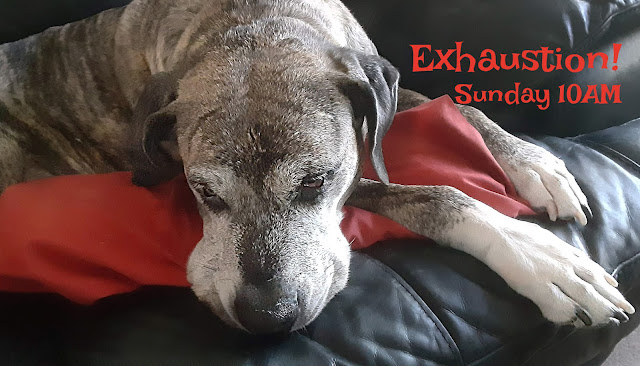 Well, if Daddy had all those years to do the job, and did not, he should not complain about hiring someone to do it. Wow, I am impressed with how quickly they did it. Beau, Simba says to tell you that he understands! He has been in hiding for the lat two days, and is very nervous. He slinks everywhere. I turn the T.V. up really LOUD, and hope that will drwon out the booms.

how good that the sky in your crib is a fixed sky now and that this bros did a super job.we hope next week our bastille day will be a quiet one (wishful thinking)

Hello beau,
I am glad the ceiling is fixed, you are a good dog watching the 2 men and the boy at work in your house. The fireworks and loud noises are scary, I hope it is over now. HUGS, have a happy day!

Three cheers for Humberto's brothers. I need Humberto to come and fix the drip in my bathroom.
Surprisingly I heard very few people setting off fireworks this year. There were the big ones at the park but usually neighbors across the street are setting them off.

Wow Beau you deserve a long long nap after all that. Fireworks outside and strangers in your house OH MY
Hugs Cecilia

What a blessing, having not ONE Humberto but 3-1/2! Offhand, I can think of a dozen things I'd like them to do, but you-know-who would have a fit.

Ask da momma if she saw on last night's (national) news, they were doing a story on giving dogs CBD treats to calm their anxieties. Fireworks are dumb.

I'm glad you got the ceiling fixed. Mom doesn't care that dad is unhappy. I'm with your mom.

Sorry about all the fireworks. We had more fireworks Sunday than we did on Monday. Just know your peeps will be there for you.

Have a woof woof day, Beau. My best to your mom. ♥

We're had lots of booming nights around here too. Our pawrents keep the house closed up with the AC and TV on to help drown out the noise. You are lucky to have found a nice handy man who also has nice brothers.

Sorry you don't like the pyrotechnics Beau. I love them but F won't let me go and inspect because she says a tiny minority of people do evil things to animals that get too close to fireworks. I have to watch them from the windowsill or balcony. I hope you get some sleep now. Paw smacks Mr T

Oh my! I'm glad you were able to get that fixed. Sounds like some sleepless nights. I was up at 2 am last night. I'm really tired today. It's really sad about all the noise the pets have to listen to.

Oh poor Beau. Gail and I do hope you soon get a good nights sleep. We heard some fireworks in Nottingham on Sunday night and suspect that Americas studying or working at the nearby university were celebrating too.
Toodle-oo!
Nobby.

We totally understand Beau, those darn boomies. Yes, we were serious, our will go on until at least the 15th. There's a firework place that sales them that is close enough we could walk to so the yahoos stop and buy them on the way home from work...SIGH.

Well, Beau, that answers our earlier question about how you have been doing with the fireworks. We wish we were there to tell you it's all ok, and won't hurt you. we had a conference and figured that out. Actually no one fell asleep until the IDIOTS stopped making things go boom, but at least we weren't scared. Yep probably one or two more nights. Mom says she's glad your Mom took charge and got the ceiling fixed. Go woman power! XOXOX Xena, Lucy, Chia and Riley

I'm so sorry about the noise. We're lucky here, we haven't heard any for several years now.

If only more people were like the wizard: https://www.gocomics.com/wizardofid/2022/07/03

I am sorry you had all that noise Beau and then the problem with the ceiling. Great job Mama, she always takes care of you.

Hi friend, Ojo here! Our Bad Loud Night came earlier because we call it Canadaday here. I did not like it and made my person let me sleep on the Bed beside her instead of in my crate. I am sorry to hear that you had so many Bad Loud Nights! Also I love it when there are lots of people in the house too!!