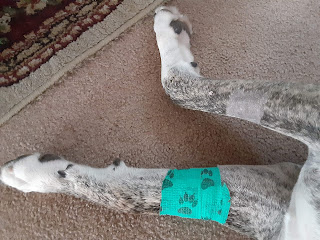 Beau sporting Two shaved legs, the bandage she said was for the catheter. The other for drugs.
He was one drunken dog when he came home at 12:45 and this is how he laid until 2:45.
No food or water since since the night before.
He would not wake up. When we brought him in, he staggered a few times and fell.
the tech said he would sleep about an hour or 1 and 1/2. Then he cold eat.
I felt his paws and they were all four like ice.
I went into recovery nurse mode,
Slapping his face gently, gently saying
Beau, what's my name, what's your name, how man fingers do you see!
Over and over, he finally got up staggered around and around like a drunken sailor. Every 15 minutes I did the same thing. after 4 times of this we all three staggered out into the back yard and he peed and we clapped and yelled good boy. On the way back into the house he staggered and fell up against the book case and 5 yelps like a dog hit by a car, just ripped my heart into pieces.
Finally at 4 pm he ate two ice chips, 2 saltines and a piece of cheese to give him his pain pill.
He did not come back to normal until this morning.
Still half drunk he slept from 7:30 to 2.22 am, I heard him smacking his lips and immediately went into helicopter MOM MODE.. could not go back to sleep, got up and he did not follow me down the hall.
I fretted and fretted and Bob got up at 3 and came down the hall. Beau did not follow.
Bob hollered down the hall Beau come here.
He slowly walked to the back door, went out and stared around and came back in.
I took his water bowl and sat it under his face where he laid on the carpet and wonder of wonders he drank a good bit of water. I handed him a piece of dog food, he  ate it and i filled his bowl with his regular 3:30 am food and he ate it all and half a bowl of water.
He is back! I have stopped fretting except for the $420.00 the x-rays cost, we still don't know what they found.
Will update when they call...... We have survived a simple TEST! I think it hurt me most!
Posted by MadSnapper at 4:55 AM

Hello,
It takes awhile for the sedative to wear off, poor Beau.
I hope you are feeling much better, eating, drinking and going outside.
HUGS, take care and get some rest.

I bet Beau is wondering just what happened? Or do you think they know? When he stumbled around, was he still limping? Poor thing!!

So relieved to learn that Beau came round eventually. This post has helped me understand why Bertie's vet is so reluctant to sedate him and subject him to another scan to monitor his bladder tumour. (Her view is that, with no other treatment options recommended, any decisions going forward are based on our - mostly my - assessment of his quality of life).
I'll be looking out for the update on what was learned from Beau's X-ray.
Sending hugs, Gail.

dear beau we wish you super good news when the vets read da x-rays.... and we hope all that stuff is gone now from ou and you are da best Beau you always be. Da nelly crashed into doors because he started to walk with closed eyes as he came back from da x-ray, that can be very scary moments when they come back from lala-land...

Oh Beau I have experienced the same drunken feeling recently. Back in August
I'm so happy you are up about and eating
Hugs cecilia

I will probably be gone by the time you find out anything...hopefully I will be able to receive messages/check this blog by then.

Good morning, Beau. I'm so relieved to hear you're eating and drinking again, and leaving p-mail! Your momma's the best-est recovery nurse EVER.

Praying for good news from the vet!

That anesthesia can be difficult to come out of sometimes. We're glad to hear Beau is awake and doing well this morning and we hope you hear from the vet soon.

All I can say is thank you GOD for some more time!

It's so scary when they are out of it. I can remember our Angel Little Bit doing about the same things. I'm glad he's back. I'm doing the happy dance right along with you.

Have a fabulous day. Scritches and healing hugs to handsome Beau. ♥

OH GEEZ, how awful and scary all the time. I hope Beau is better soon.
Mya http://www.keeperofthefarm.com

Crikey mate, aren't those sedative things awful? Tell your Mum off for sharing photos of your shaved bits (I managed to keep my bikini look out of the www.) We hope you are feeling a lot less fuzzy and back to some kind of normal real soon. Paw smacks Mr T

I'm glad you're coming around Beau and we're all sending purrs, prayers and POTP.

Good Golly...what a scary thing. You have the best Mama who "brought you back" poor baby..get your strength back and begin to enjoy your special life again.
Sue

Well I am glad to hear he is getting back to normal. Hope it doesn't take too long to hear about the x-rays.

We are deeply sad to read about Beau's health challenges - your pack has had a lot to deal with recently. We send you POTP. Hugs. Lee, Phod and Lady

Every pup responds differently to anesthesia. We can see if knocked poor Beau for a loop. We are surprised you didn't get a readout of the xrays yesterday. We hope you have heard something today. Sometimes the waiting is the worst part.

Yep! Moms are always worried...I, Marv, think it is a thing they learn at Mom school. We send you Purrayers and extra strength!

Beau was so out of it most of the time, it was YOU who dd the most hurting. Such is the life of a good Mom.

My heart is there with you fretting. Praying for good news. I'm so glad he ate and drank water. ((HUGS))

Hi friend, Ojo here. We hope there is good news. We are sending many licks and wags!