The Birthday Party of the Century

Dear June Bug, and Ms Zoolatry now AKA Ms Boolatry, thank you for an early birthday card, sent to remind my brain fogged mama that I had a birthday coming up, and for the box of balls for me to chase and mama to play with.
Scenes From The Birthday Party of the Century for Beau's 8th Birthday
All My Blog Friends Showed up.
Mama decided to have a backyard party, because well, this many canines and felines in side our small house might not turn out well. 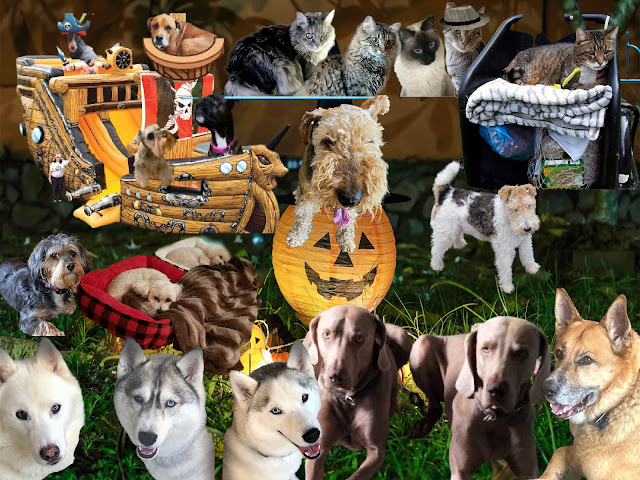 Xena told Lucy and Riley they could make a grand entrance if they flew the pirate ship into the middle of the back yard, and in the rush to get to the party totally forgot to bring Chia.
Tigger argued a donkey crossing the Atlantic Ocean topped a flying pirate ship, and then got miffed because Bertie wanted to Play Pin the Tail on Tiggers Donkey.
Ruby sat on the Jack O Lantern to be the center of the party. Gracie and Macie brought their beds and refused to get up, while Gibbs said it would only be polite for one of them to get up and let him try it out.
The entertainment was provided by the Three Woos, Lighting, Timber and Misty and Da Phenny and da Nelly, as always trying to cause trouble, said their voices were not singing but howling.
The Woos said they were WOOING in harmony, not singing or howling.
Phod said, I agree they are  wooing and where is my sister, I want my sister.
Mean while Brian, Simon, Seal and Dolly were prepared to be entertainment back up but could not come up with a name for their Quartet, and they could not sing if they had no name.
Brian said feline harmony was better than canine  harmony and Mama had to intervene and say they could sing without  a name and that both groups could sing.
Da Phinney and Da Nellie jumped in and said they could do a comedy routine, and just about then they all realized the other half of the guest were at the bar with Beau and there was not enough room for all of them. 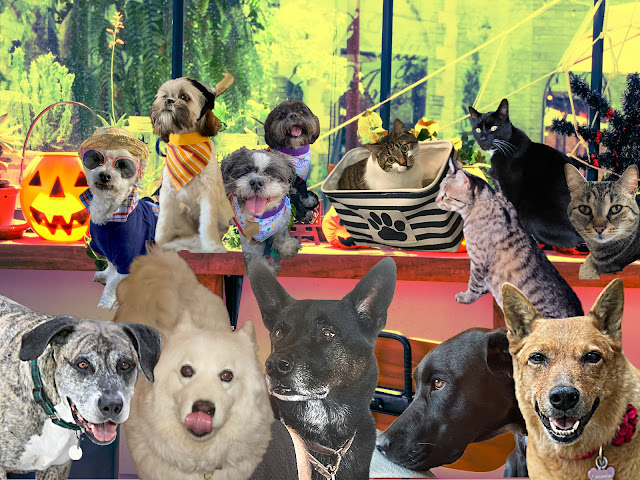 , Beau had invited Samson, Hailey, Faith and Cinnamon to the Big Dog Bar.
When the rest of the party goers got to the bar they found the LLB Gang,, had decided to sit ON the bar, Sunny had her nose in the air because she did not want to sit next to Arty, Rosey felt left out because she was n the back, Arty stole the show because he came dressed in sunglasses and a straw hat.
there may or may not have been words between Cinnamon and Beau, since Beau said his present from June was a box of orange thangs, and Cinni said it was a box of Precious.
they finally  both agreed to disagree and called the present
A box of Precious Orange Thangs,
but then could not decide if Beau would share or not.
June showed up with her own box to sit in and tried to tell Marv there was not enough room in the box for two, just as Marv made a flying leap from Cinnamons Back.
Kozmo and Jo Jo just decided to ignore the antics of their siblings and have a drink.
Beau wants to know if you can find his favorite present in
the stack of 87 presents he received 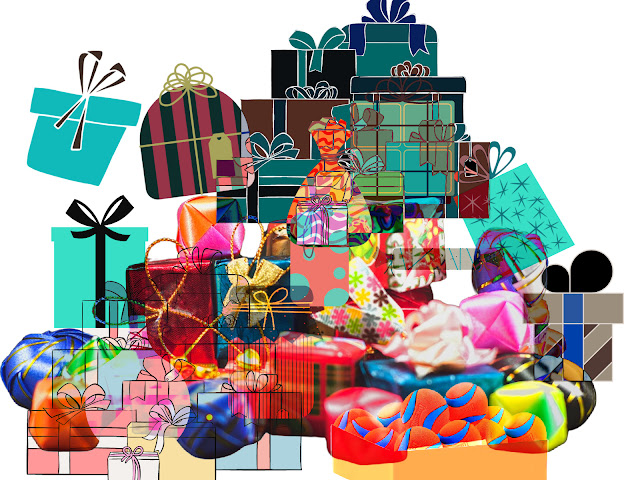 What a wild and fabulous party! Happy Birthday, Beau!!

Hey Beau, Happy Birthday, I absolutely loved your party. And Tigger needs to get a sense of humour about that pinning tail on the donkey game.
Toodle pip!
Bertie.

Happy Burthday, Beau! I see orange things in that group.of oresents... are they what makes your heart sing?

Happy Birthday dear Beau and thanks for inviting da wild weims... we just did a little comedy, da nelly wrecked the brandnew slippers of the mama... if you open the window you will probably hear her LOL

Happy Birthday Beau. What a fabulous party. I do hope that Gibbs behaved himself while he was there.

Me and Isaiah are the two wallflowers...partying dogs are scary for cats. But, we had to wish Beau a happy birthday.

8 is great and so is BEAU!
Happy Always Friend,
tail wags JUNE and her Hu-Mom.

What a great birthday party.

Everyone showed up for your birthday bash, Beau. I'm not surprised. You're very popular you know.

Have a woof woof day and birthday. My best to your peeps. ♥

Happy Birthday, Beau! You won't mind if we crash your party, will you? We added our pressie box to your pile and we're sure you will like what's inside.

Beau 8 is a great age and OMDs/OMCs look at all your friends gathered to wish you well.
Hugs Cecilia

Happy Birthday to Beau and looks like his friends helped him celebrate in a big way, And, no I could not tell which was his favorite present in that group.

That is quite the epic party and we all wish you a Happy Birthday Beau!!! Oh, the name of our singing group is The Royal Meows!

Basil and The B Team ~ BionicBasil ® said...

Happy Birthday Beau! We hope your day is epic!

Heigh! Ho! ... the gang's all here!
What a rollicking good time. (Well, except for my bashful Lady Girls.)

Methinks your momma is the hostess with the most-est. Gosh, what will she think of NEXT year?
Happy Birthday, beautiful Beau. xoxox

My Granddogger Snicker is wishing you a very happy birthday Beau...
Here's to many more and enjoy that box of orange balls.
Sue

What a wonderful pawty, thanks so much for inviting us!!

Ms. Boolatry/Zoolatry always does fantastic and sweet work. We are so happy you included us in your big birthday bash - it sure was a whole lot of fun!!!

Happy, happy Birthday, Beaumont. So those hooligans snuck out while their Dad and I were at work! Boy, can they ever keep a secret. BTW, Chia IS there, on the top of the back of the ship, wearing the pirate hat she got for Talk Like a Pirate Day.
It's great to see how many of Beau's friends came to help him celebrate. And yes, the box of orange balls must be his favorite present.Love, Amy, Mom of Lucy, Xena, Riley and Chia

Happy Birthday Beau!
What a cute and creative card.