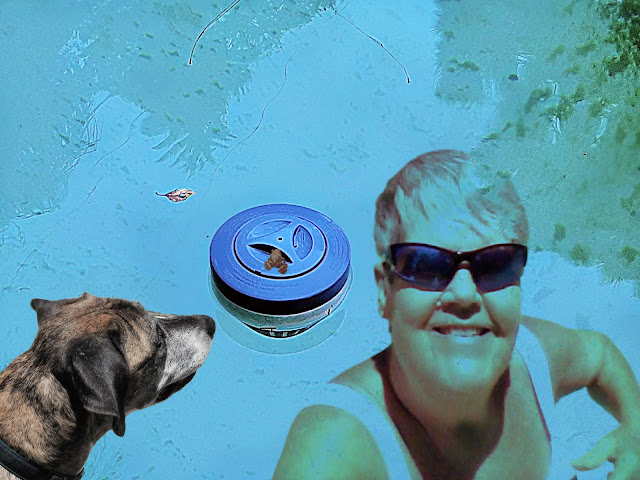 Saturday Morning, 7:30 am, after my walk, Mama said she was to hot to eat breakfast and we went outside. she started messing around exercising in the pool I tried to tell her the floating chlorine thingy was behind her and to look. There is something riding on it.
Look Mama, something is riding on the thingy!
she finaly swam over and yelled to daddy.
Come see what is on the float!
What? What is it?
Its a cricket frog, she carried the pot to the side, and as she reached to remove him from harms way she yelled..
There are 2 of them. Two!
She started singing Froggy Went A Courtin and grabbed the tiny frogs and sat them out on the deck.
The female could sit on a pencil eraser, the male would fit on an American or Canadian Dime.
That is how tiny they were!
During the day, all day Saturday, Mama save 7 more tiny frogs.
She told me she had to save them because the stuff that comes out of the floater is toxic for frogs.
She told me before I came, 32 years before I came, they have saved big ducks, baby ducks, wood ducks, snakes, 4 kind, lizards big and little, butterflies and moths, bees and wasp. NOPE she does not save Wasp. she hates them. Something about and attack when she was 15 years old.
She sneaks around and saves Beetles, cause daddy don't like beetles.
She said twice she saw raccoons swimming in the pool.
She came inside. Jake barked his head off! Mama Screamed
This is it for Nature Friday.
How did I do??? 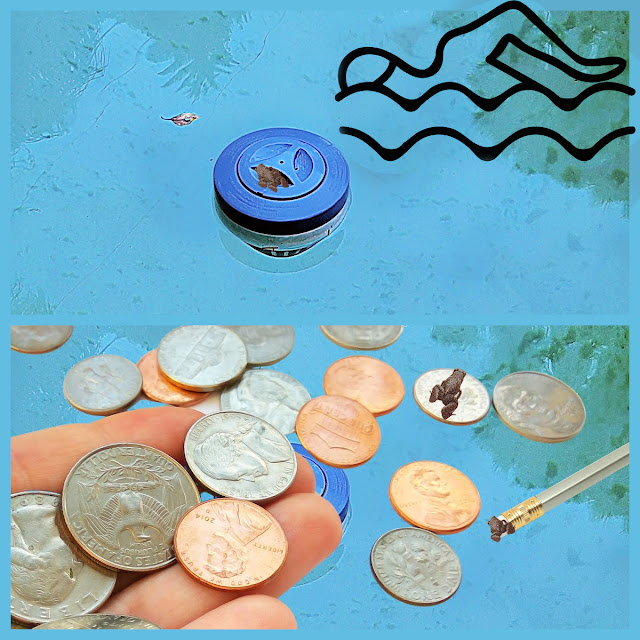 You did GREAT, Beau! and I loe mama's lesson o the size. She saved a SNAKE?! I am terrified of them. I do not care of they are poisonousnes sor not. Poison ones are just a lot worse. I LOVe the effects today!!!

we hate da wasps too... and we are no longer good with bees after our dad ended as a kind of bee-nocchio :O)))

You and your mama both did wonderful!

Great job on nature Friday. Your mom sure has rescued a lot of critters from that pool

Yay for saving the frogs. They are tiny little things, very cute.
Beau, Your mom is great! HUGS, have a happy day!

Jiminy Cricket how cute is that
Hugs Cecilia

Well done to you Beau for pointing them out in the first place. Humans who do rescues have to rely on dogs to find the things that need rescuing. Humans use dogs to find rescue-needing things in mountains too. paw smacks Mr T

I love to learn about the size of those frogs. Very interesting. And Beau saw them and told you! Awesome.

Those sure were tiny frogs you and your mom saved. We think it would be funny to see a raccoon swimming in your pool. BOL!

What super-duper lessons you're getting from momma and daddy!
I'd be loathe to touch a snake -- much less save one! The wasps used to love hanging around our pool in Arizona. Nasty things. Now I'm curious to hear the back-story!

Frogs can be ever so small and make such noise. What a wonderful find.

Have a woof woof day and weekend, Beau. My best to your wonderful mom. ♥

What a pawsome Nature Friday Beau!! Your Mama is a real Froggy Superhero!!
xoxo,
Rosy and the Gang

Way to go mama! They are so tiny and of course adorable.

You did great! I had no idea the frogs are that small. That's so amazing. You have so many interesting animals in Florida, you will never run out of things to post on Nature Friday.

Our Mama would save those little frogs too, but not the bugs.They're on their own. That chlorine isn't good for people, either, but what are ya gonna do if you wanna swim? Rignt? (We're like Beau and don't want any part of water.) XOX Lucy and Xena and Chia