Mama Me and a Broom plus a ball 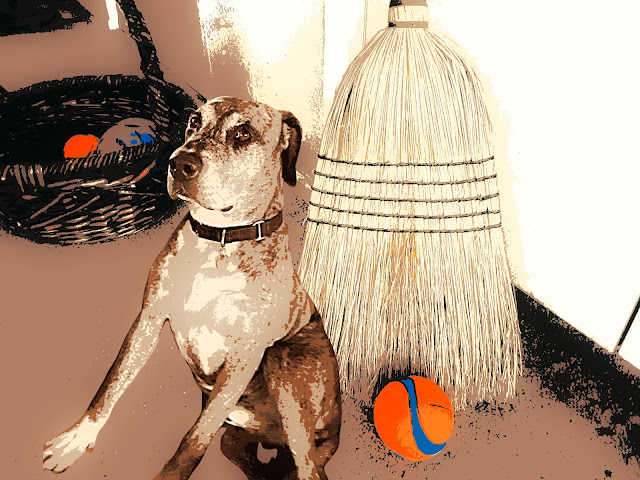 Continued from prior post HERE
I left you with a cliffhanger, Mama was sweeping the CARPET!
This is the broom,
that was sweeping the room
this is my ball, it has a split seam, to make it go POP
And When I hit it with a Bop
Into the pool it did drop.
The pool is 9 feet deep,
which means the ball it did keep.
Daddy opened the door and said go get a ball,
there were two more, right near the hall.
I refused to pick one up and daddy kept yelling,
Mama flew down the hall, yelling why are you yelling!
He yelled that the ball we had is in the pool,
he refuses to get a other one, what  a fool
Mama grabbed a ball, and bounced it to me,
I refused to pick it up, because I wanted the one in the pool that  I could SEE!
Mama handed Daddy the ball and said THROW IT!
He will CHASE it, I KNOW IT!
Game over, I came in the house
and spread a lot of dirt, I was quiet as a mouse.
Mama was sweeping with a straw broom,
the dirt everywhere was gone very soon.
The silly Beau peering over the sofa at me,
Had me clicking my cell phone, as quick as could be.
Because of low light
she said these photos are not right.
She PicMonkeyed them for something to do.
She helped me post them, just for YOU.
Posted by MadSnapper at 5:13 AM

Cute poem Beau!
Your Mama has many talents.
HUGS, have a happy day!

I hope your Daddy got the ball you wanted out of the pool and tell him to stop yelling too! I'm glad your Mama got everything cleaned up for you. :)

So did you ever get the ball from the pool?

I'm loving momma's rhyme time! Does daddy have something he can use to retrieve your ball? Tell us more!

We sure hope your dad finally retrieved that ball for you, Beau.

You get a clean sweep on the handsomeness Beau!

Love the poem and love it when you don't want any ball but the one you want. Good for you.

Have a woof woof day, Beau. My best to your peeps. ♥

So he never did play with the other ball? I love your suspensfulpoem!! And I alsolove what you have done with this photo!!

Your mom is quite clever with the poems. Too bad about your ball being at the bottom of the pool. Did anyone ever get it for you?

What a conundrum Beau....maybe if you ask really nice your Mama will get the ball in the pool for you!!
xoxo,
Sunny, Jakey and the Gang

You Mom has has a wonderful way with words! ||Great post guys.

Did you gets your ball from it's watery grave??!! OH THE SUSPENSE!!!
Kisses,
Ruby ♥

You know what you like ;) Tell mommy she has a great way with words and I like the effect she put on your photo.

Oh Beau, your broken ball drowned. RIP. Play with a new one when you are done grieving (or is it pouting) (or is it being stubborn). We've never pouted or been stubborn. *paws crossed* (Paws crossed DOES mean it's ok to woof something not 100% true, right?) XOX Xena and Lucy

He has such an attachment with his balls. Fun post!