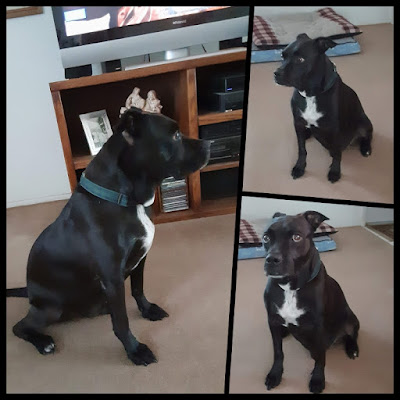 Other than in the car on a ride, this is the first sitting up photo I have taken of Big Boy since August 11th when he was diagnosed with Congestive Heart Failure.
On Sept 23rd, I boiled beef liver, and fed him a whole slice cut in small pieces. Thank you to Xena and Lucy's mom for the suggestion.
I kept the beef liver broth because a dog trainer at the Y that we swim with said that is what she gives puppies when they are not thriving. It is full of nutrients.
She said she uses droppers to feed the ones that need it and it perks them up.
that slice of liver worked wonders.
He will eat another one today. We Hope. what he eats in the am he may not eat ever again..
the liver is cheaper than dog food. I bought it frozen in slices.
I take the broth and put in small baggies and freeze. I was told it will only last 3 to 4 days in the fridge.
Here I am, the person who hates to plan and cook meals,
Planning and cooking for our Dog...
We know he has a short time with us, but want to keep him healthy and comfy as long as we can.
Big refuses all and any dog food, no matter what we put on it.
I tried hiding the food in a piece of liver, he ate the liver and spit out the dog food, same with dog food in the broth, he will no longer eat egg and that was his favorite food.
But he did eat it when I mashed in in the broth.
But he loves the liver and after one day of drinking the broth and eat the liver , we got 800 calories in him for the first time in 3 days, and he sat up like this. We were shocked.at the imediate change .
He had been struggling with his BM for a week, just one day of liver and pumpkin for his tummy and he
had 3 normal movements.
He is still lying down most of the time, but sits to eat, I was hand feeding him while he laid down.
We are going to try Chicken livers also and gizards and giblets. but only 1 new thing a week.
He will drink the warm broth, or eat cheerios or wheaties or crackers in the broth.
he loves Wheaties and they are fortifyed with vitamins. so far he still eats Milk Bones. No idea why.
Anything you think of that might work, don't hesitate to say it.
Thank you again Xena Lucy MOM..
I am putting all this info here to remember it and for anyone who might have the problem in the future.
Posted by Sandra at 12:30 AM

Our blogging friends can give us great advice. So glad it helped sweet BB. Hugs to all of you. A worrying time for you I know and I sure am sending up a prayer for you.

how great that the liver was something he really liked ... we often used babyfood for our older pups when nothing worked it mostly did the trick... hugs to you BIG Boy we love ya!!!

Glad to hear that it helped him. I remember when I was trying to get Duke to eat and he didn't want anything. I think the vet suggested giving him chicken broth.

I hope you can keep eating, liver and wheaties sounds yummy.
Love the cute photos of you sitting up!
Sending hugs and well wishes. Take care,enjoy your day!

I am so.glad toned this...and I hope he continues to like it.

I'm so glad to hear it helped him and sure hope he continues to eat it. Hugs to our sweet Big Boy.

How encouraging! Your comment about planning and cooking has touched my heart. 'Reminds me of that Josh Groban song, "What I did for love."
You know, all I've ever known to do when Macie Ann gets to feeling punky is give her Pedialyte in a syringe. Or a little pumpkin. I'm clipping and saving this information for future reference. Thank you!

I'm glad you found something Big Boy will eat. We worry about our babies so. He remains in my prayers.

Have a fabulous day. Healing scritches to Big Boy. ♥

It's great to hear you found something Big Boy will eat. We are keeping our paws crossed that he continues to like it.

Thank you for your help.
I am glad he is eating and doing a bit better.
Tell me - there is a broth called bone broth - do you think that would be good for him?
Hugs,

BB what a smart Mommy you have to ask for advice from all our blogging friends and OMDs to find something extra special you like too.
Sending hugs you your nurse and to you
Cecilia

You having something to eat made us smile. We sure love you lots BB.

Hari Om
Oh yes, my angel Jade adored her liver pilaf, and roasties and occasionally fresh. I am certain, Big, that you will thrive as much as it is pawssible on this - and the Love with which it arrives before you! Hugs and wags, YAM-aunty xxxxxxooooooxxxxxx

I am so glad to see him sitting up, it is a miracle food! How wonderful that you have these blog friends to help you! All I know about is the baby food.

Blogville is such a wealth of information. We hope Big decides he likes the liver, it has so many wonderful benefits!

Glad to hear the liver helped! Big is sure lucky to have such a caring momma.

Hailey and Zaphod and their Lady said...

Glad you found something he would eat. We had to force feed a dog once. It was terrible.

May Big continue to eat and enjoy his beef liver as well as giblets. I know that makes you feel so much better too! Will let you know if I think of anything else.

We love you forever